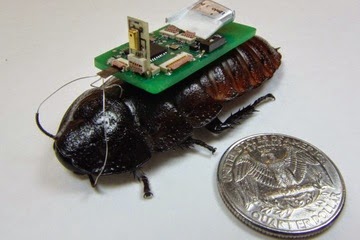 Remote-controlled cyborg cockroaches could one day be among the first responders at disaster scenes to help locate survivors.

A team of researchers at North Carolina State University

has created a swarm of cyborg cockroaches, nicknamed "biobots," that are equipped with microphones to pick up sounds and trace them to their sources. The researchers hope the biobots could one day be used in disaster-relief situations to locate survivors.

Each cockroach has a tiny circuit board "backpack" attached to it that researchers can use to control the bug's movement. Some of the biobots have a single microphone that can capture sounds at a disaster scene and send them back to personnel. Others have a series of microphones that can pinpoint the source of a sound and then steer the bug toward it. 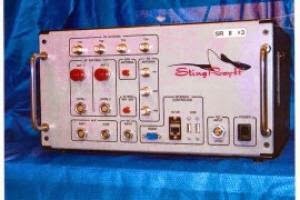 In a new court filing, the American Civil Liberties Union (ACLU) has jumped into the criminal case of a man who federal prosecutors allege orchestrated a murder-for-hire earlier this year in Baltimore, Maryland.

Specifically, in its 29-page amicus (friend of the court) brief filed on Tuesday, the ACLU supports the defendant’s earlier motion that the government be required to disclose information about how it used a stingray, or cell-site simulator, without a warrant, and therefore the court should suppress evidence gathered as a result of its use.

The ACLU has not been involved in a stingray case since Daniel David Rigmaiden, an Arizona man convicted of tax fraud who took a plea deal and was released on time served in April 2014. The ACLU hopes that through its assistance to the defendant and his lawyer, the public will be able to learn more about the secretive surveillance devices.

Reports that Sony Pictures has been hacked have been trickling in this morning, after a thread appeared on Reddit claiming all computers at the company were offline due to a hack.
According to the Reddit thread, an image appeared on all employee’s computers reading “Hacked by #GOP” and demanding their “requests be met” along with links to leaked data.

The Reddit user that posted the thread posted a year ago that they worked at Sony Pictures.

The ZIP files mentioned in the images contain a list of filenames of a number of documents pertaining to financial records along with private keys for access to servers. The message shown on computers mentions “demands” that must be met by November 24th at 11:00PM GMT or the files named will be released.
A source within Sony has anonymously confirmed to TNW that the hack and image that have appeared on computers inside Sony Pictures is real. They said that “a single server was compromised and the attack was spread from there.”
According to our source, everyone was going home following the hack: “We’re all going to work from home. Can’t even get on the internet.”