sfgate.com
Corporate espionage is probably not what you think of when you hear the word spy. It's not Sean Connery with his debonair manner, nor is it Tom Cruise hanging from suspension cable; sometimes it's as simple as a man in a bathrobe sitting in front of a computer with a touchtone phone beside it. Google found out that espionage can "allegedly" be a sovereign state seeking to quash dissidents. We'll look at both the fact and fiction surrounding the world of the corporate spy. (From godfathers to perps, familiarize yourself with the "criminal elements" creeping around Wall Street, in Handcuffs And Smoking Guns: The Criminal Elements Of Wall Street.)
More...
Posted by Spy vs Spy at 12:34 PM 1 comment:

nrc.nl
For years, Dutch law enforcement officials have been listening in on conversations between lawyers and their clients. The prosecutor’s office itself now wants to put an end to the practice once and for all.

What do a miracle doctor, a shrink, a lawyer and an imam have in common? Their professions are all on a list of words compiled by the Dutch public prosecutor for what is its biggest inquiry ever. All over the Netherlands, millions of transcripts of phone taps are currently being screened for phone calls between suspects and their lawyers, doctors or psychiatrists. A list of search terms has been compiled that could indicate a confidential conversation has taken place.

WASHINGTON --- A Defense Department official is under investigation for hiring private contractors to gather intelligence on suspected insurgents in Afghanistan and Pakistan, The New York Times reported Sunday.

That information was then supplied to military units and intelligence officials, the Times said, citing anonymous military and business sources in the United States and Afghanistan. The scheme violated U.S. policy against using contractors as spies.

The officials who spoke to the newspaper said they were not sure who condoned Furlong's operation, and it may have been funded by diverting money from a program intended to merely gather information about the area.

Michael Barrett, 48, had pleaded guilty to stalking Andrews over an 18-month period and removing the peepholes from the doors of at least three different hotel rooms to shoot video of her naked on his mobile phone.

After a celebrity web site turned down buying the videos, Barrett posted 10 of them on the Internet, identifying the ESPN reporter as the victim.

Barrett was sentenced by a federal judge in Los Angeles on Monday and ordered to pay Andrews $7,366 in restitution.

Andrews, 31, told Monday's sentencing hearing that she still suffers fear, anxiety and public humiliation as a result of having been stalked. "I'm being victimized every day...and I did nothing to deserve it," Andrews said, adding the videos will likely always be on the Internet.

"I'm living public humiliation. It's my body that's on the Internet...He stalked me, he terrorized me -- this will never be over for me, and I don't want it to ever be over for you," she said, looking at Barrett.

Starwood Learns a Hidden Camera is Worth $3 Million 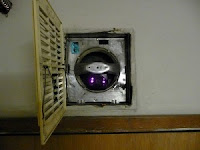 industry.bnet.com
A baker for the Westin Times Square Hotel was awarded $3 million when a federal court ruled that Starwood Hotels & Resorts was guilty of unlawful retaliation when it installed a spy camera at his workstation. Instead of taking Moises Mendez’s complaints of ethnic slurs and threats seriously and dealing with them by education or sensitivity training, management at the Westin decided on a hidden camera placed at his workstation without Mendez’ knowledge, proving the company was more interested in monitoring a complaining employee rather than outing nasty coworkers.

The Ecuadorian immigrant says derogatory comments, sabotage and threats had been simmering since he started working at the Westin in 2003. Documents show that Mendez repeatedly begged the Westin’s human resources department for help, saying his health was suffering.

The Football Association is reviewing security around the England team after reports that manager Fabio Capello and the players were bugged at a private meeting.

The alleged recording - which is understood to have been made at the team's hotel before a match against Egypt - was apparently offered for sale to several newspapers.
The FA is taking steps to block any publication of the material under privacy laws.

Millions lost due to illegal interception of cell phone calls

net-security.org
A survey released today by the Ponemon Institute on behalf of Cellcrypt, reveals that large and medium businesses are putting themselves at risk as a result of cell phone voice call interception.

According to a survey of seventy five companies and 107 senior executives in the United States, it costs U.S. corporations on average $1.3M each time a corporate secret is revealed to unauthorized parties. 18% of respondents estimate such losses to occur weekly or more frequently, 61% at least monthly and 90% at least annually.

67 percent of IT practitioners surveyed lack confidence that the proprietary and confidential information conveyed during cell phone conversations is adequately secured in their organizations and 85% believe voice data security is at least as important as other security issues faced by the business. Moreover, 80% believe that the organization would not discover the wrongful interception of a cell phone conversation that revealed valuable corporate secrets.

The Snitch in Your Pocket

newsweek.com
Amid all the furor over the Bush administration's warrantless wiretapping program a few years ago, a mini-revolt was brewing over another type of federal snooping that was getting no public attention at all. Federal prosecutors were seeking what seemed to be unusually sensitive records: internal data from telecommunications companies that showed the locations of their customers' cell phones—sometimes in real time, sometimes after the fact. The prosecutors said they needed the records to trace the movements of suspected drug traffickers, human smugglers, even corrupt public officials. But many federal magistrates—whose job is to sign off on search warrants and handle other routine court duties—were spooked by the requests. Some in New York, Pennsylvania, and Texas balked. Prosecutors "were using the cell phone as a surreptitious tracking device," said Stephen W. Smith, a federal magistrate in Houston. "And I started asking the U.S. Attorney's Office, 'What is the legal authority for this? What is the legal standard for getting this information?' "