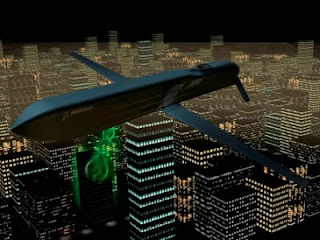 This is stuff you only see in the movies.
In what could potentially change modern day warfare, Boeing and the U.S. Air Force successfully tested the Counter-electronics High-powered Microwave Advanced Missile Project (CHAMP). The missile’s primary purpose is to disable computers and other electronics from a distance, using microwaves.


Last Tuesday over the Western Utah desert, the test was directed by a Boeing Phantom Works team, along with members from the U.S. Air Force Research Laboratory (AFRL) Directed Energy Directorate team, and Raytheon Ktech, suppliers of the High Power Microwave source.
The pre-programmed CHAMP missile flew over its first target and shot out a burst of High Power Microwaves at a two story building, successfully knocking out rows of personal computers and electrical systems in the building. The missile ended up hitting all seven of its targets in what the company described as a highly-successful test.

Check out the above Video.

More here: http://www.geekwire.com/2012/boeing-air-force-successfully-test-advanced-missile-change-modern-day-warfare/
Posted by Spy vs Spy at 5:35 PM

Would a faraday cage counter any damaging effect ?