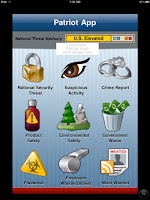 infowars.com
A new iPhone App with the misleading name ‘PatriotApp’ attempts to draw on the power of the patriot movement, turning smartphone users into a gigantic snitch network.

You might think an app with such a patriotic name might have useful functions like a pocket constitution or quotes from our forefathers. But contrary to the services one might expect, this app allows users to report any ‘suspicious’ behavior directly linking them with top government agencies.

Much like the new DHS program ‘If you see something, say something’ this app is meant to turn average citizens into a network of spies feeding information back to the federal government.

Citizen Concepts, a company formed by insiders from DHS, defines the use of such an app on their homepage