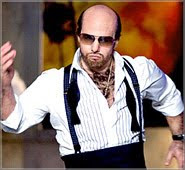 courthousenews.com
LOS ANGELES -- The former owner of a Beverly Hills-based magazine has filed a complaint seeking $5 million from actor Tom Cruise, celebrity lawyer Bertram Fields and private investigator Anthony Pellicano that claims he was illegally wiretapped after Cruise filed a defamation suit against him.

Michael Davis Sapir, in a suit filed in Superior Court, claimed that Pellicano, working for Cruise and Fields, intercepted at least 1,000 conversations before the defamation suit was settled. Cruise filed the complaint after Sapir's Bold Magazine offered a $500,000 reward in 2001 for videotaped evidence that Cruise was gay. The magazine subsequently issued a press release claiming it had received a response to the offer.