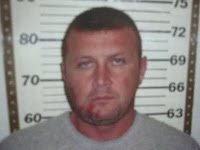 philly.com
IN MARTINS FERRY, Ohio, the police chief is going to jail.

A jury yesterday found suspended chief Barry Carpenter guilty of receiving stolen property, theft in office and tampering with evidence relating to a break-in at the home of Michelle Ross, the surrogate mother who carried twins for Sarah Jessica Parker and Matthew Broderick. Carpenter was acquitted on charges of burglary and unauthorized use of property or services.

Carpenter put his head in his hands after the verdict was read.

Prosecutors alleged that Carpenter broke into Ross' home in May, took items related to her pregnancy and the surrogacy and schemed with Police Chief Chad Dojack of neighboring Bridgeport to sell them to celebrity photographers.

Based on yesterday's verdict, he may want to make a deal.